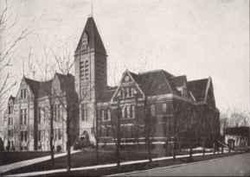 Our Alumni Association was formed in 1985 as an outgrowth of  two multi-class reunions held in 1980 and 1985. It was formed by a group of graduates who recognized the value of keeping in touch with classmates throughout the years after graduation. Very few classes of Central High held reunions on a regular five or ten year schedule like most colleges do, so it was a rather hard project to form an alumni association with graduates dating back to 1898. At first it was done by mailing lists from the two multi-class reunions previously held. Little by little we contacted graduates all over the world and wound up with a little over 4,000 members who paid five bucks to join.

The founding group of volunteers consisted of: Jim Gompf '47, Fred Hagen '40 (deceased), Norman Olson '35 (Deceased), Richard Blair '51 (Deceased), Ward Thorne '36 (Deceased), Rose (McLaughlin) Pawski '36 (Deceased), Lois (Koehler) Fritz '48, and the late Bill Snyder '35. The group met downtown in the old deLendrecie building where we were granted free use of a room in the basement. Richard Blair handled getting the State Charter, and also the editing and production of the first three issues of The Cynosure newsletter which really started the ball rolling after it was mailed to prospective members. When the charter arrived, a board of directors was elected to run the organization.  Currently the Board of Directors consists of 15 members from the classes of 1942 through 1964. The Annual Meeting is held each September with the addition of a Spring Meeting in April.

Bill Snyder brought his primitive micro-computer down to the office in the deLendrecie building and Rose Pawski began typing the 16,500 names of graduates that we were attempting to find and enroll as members. It was slow going at the beginning, but the momentum began to accelerate with each issue of the newsletter, which, by the way, was patterned after the original Central newspaper.

In 1986, Bill Snyder took over editing The Cynosure and remained its editor until December 2000. Ann (Peterson) Carlson , '56, is the current editor of the paper. We are now in our 29th year of production. The newsletter is the glue that holds the organization together. The whole idea of the association has been to help class committees with their respective reunions, produce the newsletter and act as an information point for its members.

President Jim Gompf arranged for the association to have an office in the Fargo Public Schools district office, which at the time was located in the old Emerson Smith School, which was across the street from the former Central High building. Rose Pawski became the first paid office manager of the association. She served in that capacity until 1997 when she retired. The association then moved to the new Fargo Public School District building when all the offices were moved to the 4th Street location. In March 2008, our office was again moved to South Campus II ( the old Agassiz) to make room for expansion within the district office. After being in four temporary locations, we now have a permanent home in the old Agassiz building, which is also home to Woodrow Wilson High School as well as other district offices.

Beginning in 2013, dues for The Cynosure will be $25.00,  however, most members are contributing a few bucks extra in appreciation. To join just send your dues check with your name, class year, mailing address, phone number and email address to: Fargo Central High School Alumni Association, Inc., PO Box 412, Fargo, ND, 58107-0412.

We mail The Cynosure three to four times per year. The dues letter is mailed in February and due in March.

Christine Kloubec is employed as the Office Manager and Editor. She is in the office at 1305 9th Avenue South in Fargo from 9:30 am to 2:30 pm, Monday through Thursday. She is available by telephone at: 701-232-6548 or by email: fchsaa@fargo.k12.nd.us .  We look forward to all new members, both graduates and also friends of Fargo Central.